WHALE is an interpretation of the Anglo-Saxon poem Hwael, and is thought to describe Fastitocalan.

The book is larger than usual – about A4 landscape – printed on Clairfontaine 160gsm paper.

The text is  24pt Plantin – in a lovely new casting.

The illustrations are linoprints from cuts made by Peter Grant, using a Victorian Screwpress. 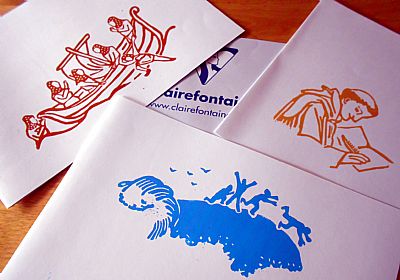 Several colours of Caligo ink have been used.

The story relates the fate of some ferocious Seafarers, who roam the seas plundering and killing.

This is paralleled with the Whale – who does much the same – except he has a habit of sometimes staying motionless on the surface for long periods.

The Seafarers, weary after their plundering see this “island”, make fast their boats to it and make camp.

The whale wakes and carries them down to the bottom of the sea! 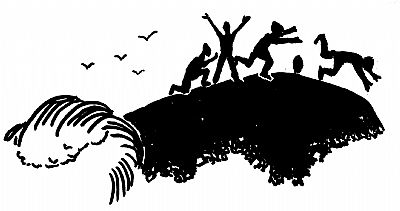