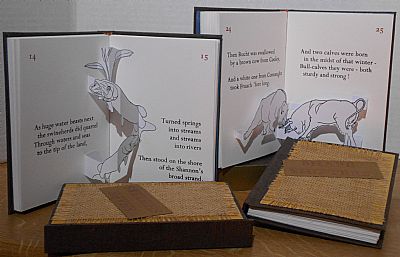 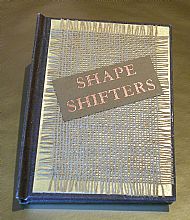 The text of this book is in the form of a humourous poem written by Peter and Frances Grant in 1976. It started life as the prologue to an unrealised play, based on “The Brown Bull of Cooley” – an ancient Irish Story. The storyteller wittily, but cynically suggests that even a slight quarrel between two swineherds (the Shapeshifters of the tale) may cause devastation.

The line illustrations were originally intended to be printed flat on the page along with the text, but after some experimentation, it was decided that the pictures should “pop-out” as the pages are turned. 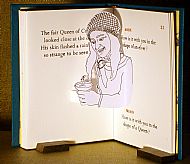 This is an expensive, time consuming process, but it is thought that it will be worthwhile. The cover has been through several states, but it is hoped that the current (understated?) one will make it “pickupable”.

Printed in 2013 in a limited edition of 50 copies signed by the artist, and by the printer. 26 pages.