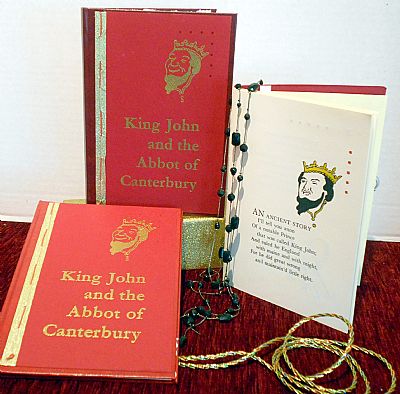 Of a notable Prince that was called King John;

And ruled he England with maine and with might,

For he did great wrong and maintan'd little right."

‘Percy’s Reliques’ were a collection of ancient documents hoarded by the Earl Percy - and unfortunately not well preserved. One story mentions that a maid was using them to light the fire! This poem was one of the documents eventually ‘rescued’.

"King John and the Abbot of Canterbury" is a poem by an anonymous writer, taken from the  Relics, but the date of it is unknown.

The poem tells a story in the Irish “three riddles” tradition.

The Abbot, who is considered by King John to be too wealthy, is asked to give, within a month, the answers to three questions. If he cannot answer them all his money and land will be forfeit.

“How long would it take me to ride round the world?”

None of the Scholars of Oxford or Cambridge know the answers, but the Abbot’s poor shepherd knows them all.

The poem is illustrated by Frances Grant, and for the first time we have ventured into two and three colour illustrations printed from relief blocks which we have manufactured ourselves - it's taken a long long time but it’s worth it!