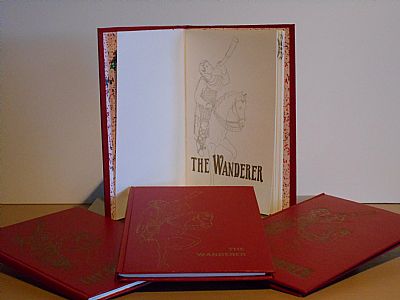 ‘Oft the solitary one prays for his Creator’s mercy.’

The narrator of this Anglo-Saxon poem describes the hardships he faces now that his “Lord” – provider of his food, his weapons, his shelter – is dead.

The Wanderer misses his companions and his Lord and his heart is heavy. He feels the cold like never before as he contemplates the ruin of the Hall.
All is hardship, all is transitory – but, he says “it is well for him to seek for mercy from the Father in Heaven where for us all rests security.”

The Wanderer is often studied at university along with “The Seafarer“ and “The Ruin”, and so is familiar to many people.

A copy of the Anglo-Saxon text, thought to have been written in the ninth century AD resides in the Chapterhouse Library in Exeter.

This new translation by Peter and Frances Grant is letterpress printed in three colours, and is cased in red bookcloth covered boards with a beautiful golden image of The Wanderer on his horse on the front cover.