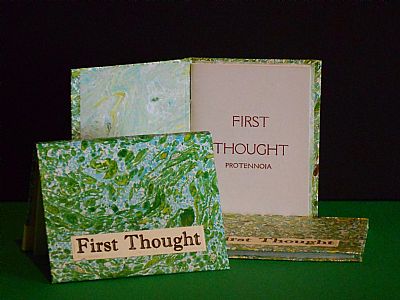 'I am the Thought that dwells in the Light'

In 1945 a cache of thirteen papyrus scrolls were discovered in a cave near Nag-hammadi in Egypt. Written on the papyrus were texts thought to be some 1600 years old. Mainly sacred Gnostic texts they included the hitherto unknown “Gospel of Thomas”, and this poem “Protennoia” or “First Thought” is one of the texts discovered. The poem is spoken in the voice of a female Deity.

Edition of 50 copies Letterpress Printed in two colours this is a miniature book.

All prices include postage and packing in the U.K.